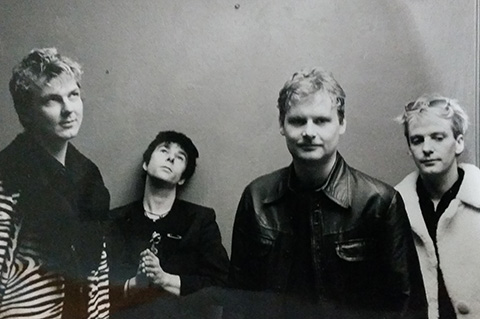 HOTR has teamed up with local legends The Dead Salesmen to release their recorded swan-song, 1998’s much loved and cherished, Amen on limited edition 12″ vinyl.

“The end of the 90s promised a fair bit for us on some levels but we were clearly coming to an end by the time we went into the studio to do this (record Amen). Despite the dark themes that seeped in lyrically, all I hear now when I listen to this is an amazingly united front – coming out of the shadows and making something pretty bloody life affirming. Julitha Ryan became a full time member during the making of this album and you can thank her for bringing us together. “ – Hap Hayward (Vocalist/Lyricist)

“Heart wrung lyrics that are simple, intimate and emotive yet avoid the common muck of cliche. He grasped the holy grail of great songwriting: perfect, spare words that strip life to the bone.” – Sandra Bridekirk, The Australian

“Like Cold Chisel in the ’70’s and ’80’s, who were also known as an unruly bunch, The Dead Salesmen are able to speak directly of their own lives. Their songs are conduits of their time and place, concerned only with the world around them and inc consequences far the spirit and the possibilities of redemption.” – Gregory Day, The Age